Chicken Enchiladas are flour tortillas filled with enchilada sauce, marinated chicken, black beans, green chilis, cheese, and then topped and baked with more sauce and cheese! Give my Seafood Enchiladas a try, too!

Enchiladas have been a staple of Mexican cuisine for hundreds of years. In fact, it was considered a national dish when Mexico declared its independence in 1821. This is nothing like the original enchiladas from Mexico, but does carry the same name. If you want to get more authentic; add some hot peppers, corn tortillas (be sure to heat the tortillas in pan with sauce before filling) and cojita cheese.

There are three main parts to this recipe–the marinated chicken, the enchiladas, and the toppings.

Chicken: Boneless, skinless chicken breasts were marinated to use in the filling of the enchiladas.

Enchilada Sauce: I made mine from scratch, but you can certainly just buy a can for this recipe.

Black Beans: Canned black beans need to be drained and rinsed well before eating. When you open the can, you will notice a liquid in there that doesn’t look too appetizing. It’s simply a combination of salt and water and the starch from the beans. Rinsing the beans actually does more than just remove that murky substance, it lessens the sodium of the beans.

Marinating and Cooking the Chicken

After you have coated the chicken with the marinade, zip the plastic bag, making sure you get all of the air out first. Place the chicken into the refrigerator to marinate for a minimum of an hour, up to eight hours. When ready, cook the chicken in a skillet until the internal temperature of the chicken reaches 165°F. Remove the chicken from the skillet and let it rest for a few minutes before dicing it. Set it aside as you prepare the rest of the recipe.

How to Make Chicken Enchiladas

With the chicken cooked and set aside, it’s time to get the enchiladas made. In a large skillet over medium-high heat, cook the onion until it softens. Then, add the cooked, diced chicken, black beans, green chilis, salt, and pepper. Stir the ingredients to combine and remove from the heat. This makes about four cups of the mixture.

To assemble the enchiladas, mix together both kinds of cheese and set aside. Pour a half-cup of enchilada sauce into the bottom of a 9×13-inch baking dish, spreading it evenly around the dish. Then, working one tortilla at a time, fill each with the following:

Roll up each tortilla and place it seam-side down into the pan. Top the enchiladas with the rest of the enchilada sauce and remaining cheese. Bake for 30-33 minutes, or until bubbly. Serve topped with tomatoes, sour cream, and cilantro. You might want to add some easy guacamole to the toppings as well!

Can I Freeze Enchiladas?

Yes! Enchiladas freeze well after being cooked. To freeze any leftovers, first, let the enchiladas cool completely. Next, store them in a freezer-safe container, making sure to get as much air out of the container as possible. Label and date the containers; enchiladas will last up to three months in the freezer.

When ready to enjoy the frozen enchiladas, let them thaw in the refrigerator overnight. Then, add some additional cheese on top and cook them in an oven-safe dish for about 25 minutes at 350°F. Or, if you are in a hurry, you can warm up the enchiladas in the microwave. 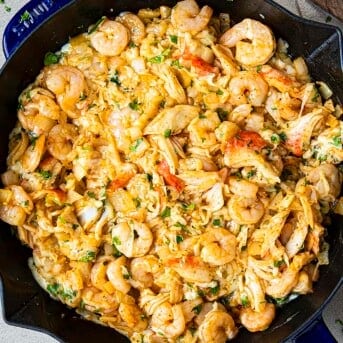 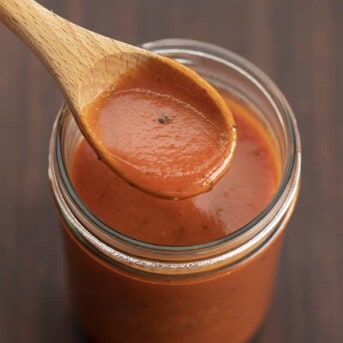 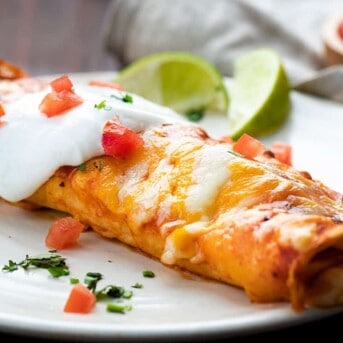 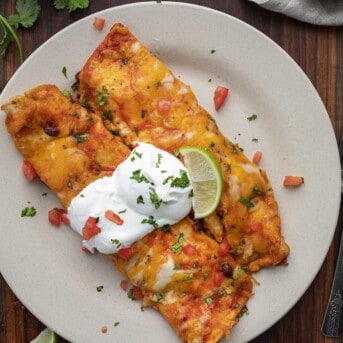 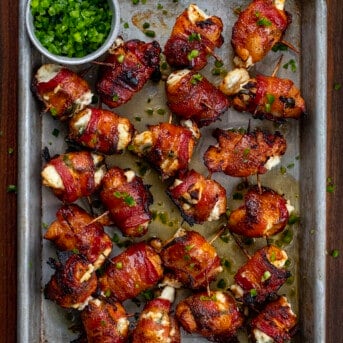 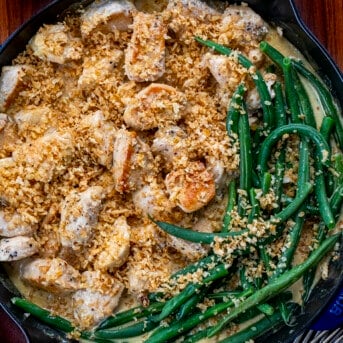